Raworth’s Doughnut as a Compass for a Sustainable City? Lessons from the SUSA Initiative

Home/Sustainability/Raworth’s Doughnut as a Compass for a Sustainable City? Lessons from the SUSA Initiative
Previous Next

Raworth’s Doughnut as a Compass for a Sustainable City? Lessons from the SUSA Initiative

In its Circular Strategy 2020-2025, Amsterdam relies on the Amsterdam City Doughnut developed by the British economist Kate Raworth. The model depicts an economy where societies and businesses contribute to economic development while respecting the limits of the planet. The Doughnut provides a playful approach to framing humanity’s challenge of the 21st century: meeting the needs of all people (the ‘social foundation’) within the means of the planet (the ‘ecological ceiling’). The strength of this model is that it captures the social as well as the ecological dimension in one simple and tasty metaphor. The fact that Amsterdam officials took it up as the basis for their strategy shows how they believe the doughnut can act as a compass for human progress. The model however, does not answer the pressing question of how the economy can be squeezed into this donut shape. Scholars United for a Sustainable Amsterdam (SUSA) took up this challenge in 2021 by means of a bottom-up and interdisciplinary approach. 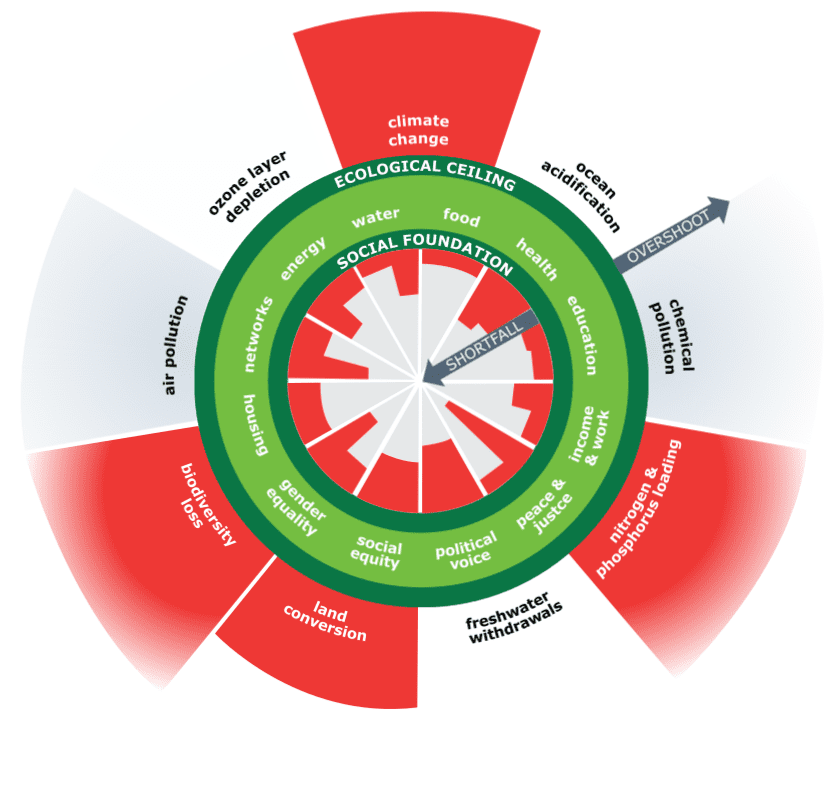 The city of Amsterdam demonstrates how global change requires local action. Within Amsterdam, the social foundation must be secured and the environment must be healthy, but importantly the city must also strive not to adversely affect either of them elsewhere. Hence, the central question to the Amsterdam City Doughnut reads: How can our city be a home to thriving people in a thriving place, while respecting the wellbeing of all people and the health of the whole planet? The following four interdependent questions provide a tool and starting point for reflection: 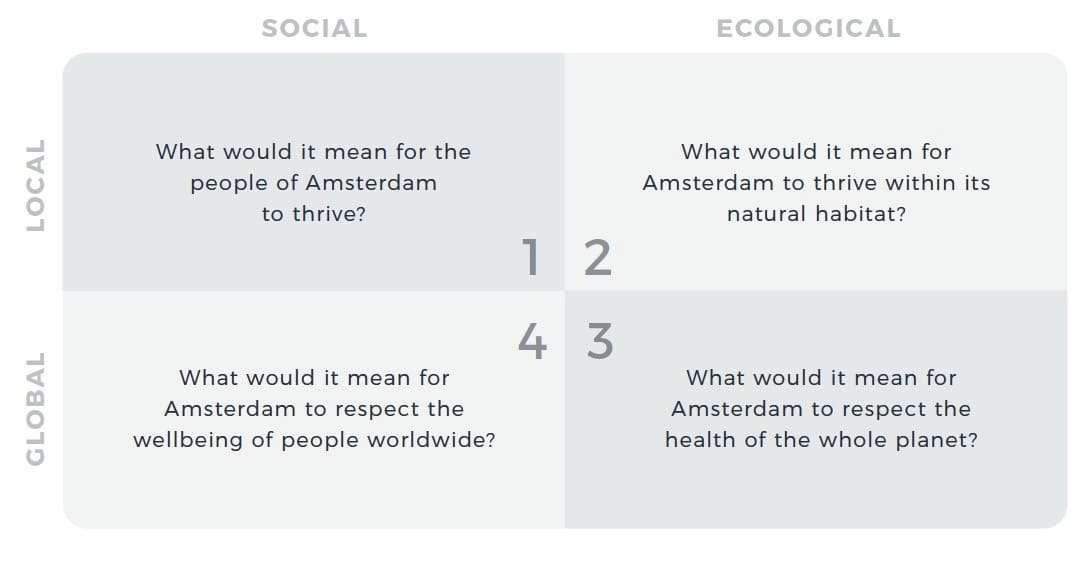 These questions turn into the four ‘lenses’ of the City Doughnut, producing a new ‘portrait’ of the city from four inter-connected perspectives. Drawing on the city’s current targets for the local lenses, as well as on the Sustainable Development Goals and the planetary boundaries for the global lenses, the city of Amsterdam and Raworth’s team compared desired outcomes for the city against statistical snapshots of its current performance. Based on publicly available targets and data, they made what they call a public portrait of Amsterdam. Their hypothesis is that the process of creating such a city self-portrait is what will make this tool for sustainable decision-making really take off.

In 2021, scholars from the University of Amsterdam, Vrije Universiteit, the Amsterdam University of Applied Sciences and Academy of Architecture came together under the umbrella of SUSA to investigate how – with their diverse disciplinary toolkits – they could contribute to making Amsterdam Doughnut-proof. Assisted by student research interns, they collected stories from (corporate) citizens of Amsterdam to understand the perceived barriers to living and doing business more sustainably and socially. The goal of this investigation was to map the barriers perceived in real-life by Amsterdam’s citizens – not to provide a comprehensive overview of every possible barrier to behavioural change in pursuit of sustainability in Amsterdam. Eight main barriers to overcome were distilled from the collected stories. For four of those, interdisciplinary teams set off to investigate these barriers and their solutions. While beautiful results were achieved, such as on rethinking garbage through anthropomorphism[1], in this blog we discuss three overarching findings.

First, the city must remain mindful of the extent to which the methods and approach adopted for pursuing a doughnut-proof city may be part of the problem. To illustrate this, some tendencies can be observed in which a ‘business as usual’ approach is adopted, where targets and indicators are formulated and performance is measured and monitored. At times, an emphasis on sound scientific and technical solutions may be perceived as too complicated for the average citizen. In such an approach, asymmetry of power is embedded as it alleviates certain types of knowledge and certain experts as the authoritative figures of the sustainability transition. This approach may protect dominant economic and political interests and might reproduce inequality.

The city must provide space for challenging the cultural assumptions that underly ‘the way we do things around here’. For example, some citizens challenge the individualist values, habits and social norms that dominate the sustainable city discourse. Others criticize how nature is conceptualised through an instrumentalist lens in service of humans rather than regarded for its inherent value in the city. By involving more and different voices, the city can allow for a great diversity of understandings in its glocal politics.

Tensions between the economic, social and ecological

Second and relatedly, a doughnut-approach to sustainability takes into account social and ecological matters that used to be considered as externalities not to be accounted for. Hence, the doughnut complicates decision-making. It brings to the fore a plurality of interests that may complement one another but may also equally conflict. This raises the question of whether society nowadays is sufficiently equipped with the tools of ethical and deliberative decision-making to balance interests fairly. Notwithstanding its focus on people and planet, the doughnut model remains an economic model rather than a model for policy, a theory of justice or a democratic model. It is built upon the presumption that the social foundation and the ecological ceiling are so fundamental that they are apolitical, but improvements for one may sometimes affect the other.

For example, in one of the stories we collected, a disabled woman flagged that transforming parking lots into little green gardens deprived her of accessibility to shops in her own neighbourhood. Socially inclusive greening of the city thus requires more than planting trees – smart solutions must be sought. We could, for instance, think of creating some sort of ‘rails’ out of steppingstones through these green areas. This would mean most of the surface could be greened, but that elderly and disabled people could still drive through those areas in a scoot-mobile-car. Such ideas must be developed with direct input of the directly affected. Realising such solutions comes with additional costs, raising distributive questions that need to be dealt with on a political level.

Agency of all inhabitants

Third, voices from the neighbourhoods of Amsterdam flag that at the very local level, concepts such as the Doughnut are of limited meaning. Local changemakers perceive barriers of disconnection that must be overcome. They seek solutions in reconnecting with one another, with the people in their local community and with the more-than-human world around them. The donut model perceives the ecological dimension as a ceiling, suggesting that until the planetary boundaries are reached, economy is free to flow as it deems fit. Yet many of Amsterdam’s inhabitants are non-humans: birds, foxes, rats, insects, plants, trees, etc – who are social, too. Where there are municipality plans to construct new housing in the river IJ, designers already built houses there for fish. For an individual fish, bird, or tree, the ecological ceiling is a violent measure legitimizing being killed in the name of human economic progress.

The willingness of local changemakers to connect to other people and to urban more-than-humans generates a breeding ground for transformative change. Moreover, these changemakers flag the need for agency. They must feel like they can make a change and influence decisions to be taken related to their neighbourhood. Agency empowers, it makes us feel that our actions matter, that we matter. Such empowerment nurtures courage to look beyond who and what we are today – as individuals and as a society. It nurtures the enthusiasm to reimagine the future, generate new forms of solidarity and take action in pursuit of that reimagined future. We spoke to a professional gardener full of ideas; he wanted to plant a city forest to be maintained by the local community, but bureaucratic rules prohibited this. Notwithstanding how daring the task, the municipality must be able to step back where necessary.

The unsustainable way in which we have done business and managed the city relies on hard-wired cultural assumptions that we may insufficiently be aware of. The city must allow for a great diversity of understandings in its glocal politics. By involving more and different voices, one changes the conversations that shape everyday thinking and behaviour and the narratives that underpin our social reality. It is our goal, as lawyers, to further explore (in our upcoming paper[2]) how the law obstructs these goals but also may equally provide key solutions.

[1] SUSA team Rethinking Garbage set up an educational campaign, in which ‘garbage’ talks to the public. See their Instagram page: https://instagram.com/rethinkinggarbage?utm_medium=copy_link