Frenzy of the Streets: The Radical Aspirations of Justifying Contract in Europe

Home/Theory/Frenzy of the Streets: The Radical Aspirations of Justifying Contract in Europe
Previous

Frenzy of the Streets: The Radical Aspirations of Justifying Contract in Europe

A comment on the ACT Book Symposium of 30 September 2021

On 30 September 2021, the Amsterdam Centre for Transformative Private Law hosted and organised a book symposium around Martijn Hesselink’s recent book Justifying Contract in Europe: Political Philosophies of European Contract Law (Oxford University Press: 2021) in Amsterdam. The book is the result of more than a decade of research, teaching and political and academic engagement into the debates concerning European contract law. The fact that this book has emerged over such a long period of time perhaps also accounts for its richness and density, for this is not a book that has been written in a rush, but one that has matured over time. As such, the book requires careful readership, not only because it is rather lengthy, but also because the nuance and depth the author aims to bring to the normative debate on European contract law is felt at every page.

Each substantive chapter of the book discusses one of the abovementioned questions, with the author submitting each question to all six political theories. What thus emerges is a 6 x 6 grid, whereby each chapter contains six possible answers to the same question of European contract law. This matrix functions as an ordering mechanism – which one must admit, appears almost too neat, clear-cut and good to be true – and determines the overarching structure of the book. With an eye to teaching purposes, however, the structure certainly contributes to the readability and clarity of the book. At times, the answers that the different political theories provide also appear relatively (and perhaps even surprisingly) similar. Other times, however, they seem to diverge; sometimes the answers are concrete and clear, whilst other times they seem rather indeterminate. But as Hesselink emphasises, the book’s focus is principally on the reasons or justifications the different political theories bring to the debate of European contract law, not on the exact answers (outcomes) per se. 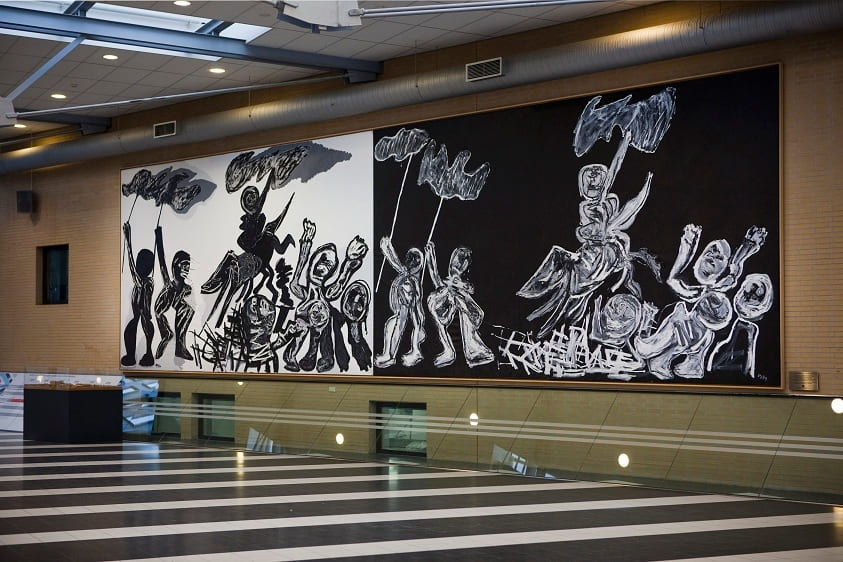 (Never) judge a book by its cover

Contrary to what the popular proverb perhaps suggests, the cover of a book – its ‘surface’ – may give the reader sometimes a first indication or entry point to understanding the significance and urgency of its content. It appears to me that this is also the case with Justifying Contract in Europe. On its cover, we see an image of a painting by Karel Appel. Appel was a famous Dutch painter, sculptor and poet of the previous century, and one of founders of the post-war avant-garde movement CoBrA. Note that the relatively modest picture that we see on the book’s cover is in reality an enormous painting of 4 x 14 m. Appel painted this piece, which he entitled La Folie des Rues, in 1989, in commemoration of the two-hundredth anniversary of the French Revolution. The painting consists of two seemingly identical scenes; at first glance, it may appear as if it regards a simple opposition between black and white figures, and an almost symmetrical inversion of foreground and background. On closer scrutiny, however, the contrast between the two panes appears more nuanced. As the title of the painting already suggests, it represents the ‘frenzy of streets’ – the figures are disorderly arranged all over the canvas. Appel was very fond of his creation. The ‘turmoil’ that the painting depicts, represents innovative movements, which, as Appel maintained, initially always manifest themselves in chaos.

In this regard it was only symbolic that the first book symposium dedicated to Justifying Contract in Europe on 30 September 2021 was held at the Amsterdam Law School, only a stone’s throw away from Appel’s massive painting. The book symposium was hosted and organised by the Amsterdam Centre for Transformative Private Law (ACT), the successor of the Centre for the Study of European Contract Law (CSECL) – of which Hesselink had been the founding director. To many people present, the book symposium was one of the first live events since the Covid-19 pandemic had begun, and you can imagine how thrilled (after such a long period of videoconferencing and working from home) everyone was to see each other in real life and discuss the book in person. In a way, the book’s project had thus come full circle, and its message, quite literally, had been driven home.

Apart from the reference to location, and its relationship to the University of Amsterdam (with its presumed, and no doubt idealised, ‘liberty-loving character’), there were of course more substantive consideration for choosing this image for the cover of the book. The image urges us to take the project’s revolutionary aspirations seriously, even though, as we also saw during the book symposium, several commentators precisely critique the book in this respect. The first time we encounter a certain ‘frenzy of the street’ is in the context of the project’s ‘radically democratic hunch’, from which Hesselink, following Habermas, proceeds. Hesselink submits that the six leading political theories he discusses offer potentially effective ideas in a democratic society and, as such, may have an impact on the future of European contract law.[2] One implication of this ‘radically democratic hunch’ is a ‘pluralistic hunch’, as Hesselink explains that in ‘a democracy, it is unthinkable that generally applicable laws will be based on one single underlying value or principle’ (Hesselink, 2021, p. 9).

A second observation regarding the book’s revolutionary aspiration (perhaps more precisely: its radical aspiration – ‘as going to the root of the problem’, as Hesselink reminds us of its etymology) concerns what we could perhaps best term the politicisation of European contract law. As Hesselink explains: ‘Utopian proposals can open people’s minds towards new horizons, widening the scope of what seems realistic and feasible, and so changing the understanding of which views are moderate and which extreme, and of where the political centre is located’ (Hesselink, 2021, p. 438). Hesselink offers an in-depth analysis of normative political questions of European contract law, whereby he engages with European contract law as a specific field of study. In this respect, Hesselink aims to move the debate ‘beyond acquis positivism, market reductionism, normative intuitionism, private law essentialism, and methodological’ (Hesselink, 2021, p. 1).

Uniquely positioned between European contract law and contract law theory, the book brings together two debates that have hitherto remained largely separated – in both a geographical and ‘cultural’ (linguistic and/or discursive) sense. Crudely put, we could term them a European debate on the one hand, and a (predominantly) Anglo-American debate on the other. No doubt we encounter various difficulties when bringing these debates together; they each seem to speak their own ‘language’, so to speak, and engage different subject matters. Part of Hesselink’s project thus consists of clarifying the terminological confusions we encounter when terminology from the debate on political philosophy is brought to bear on questions of European contract law – and, whilst to a lesser extent developed in Justifying Contract in Europe, the other way around. This is yet another way of understanding the book’s relationship to (initial) chaos: the confusions and misunderstandings we may first experience when we are confronted with a discourse that is different from ‘our own’.[3] Undeterred by these initial difficulties, Hesselink shows how (after these initial confusions and misunderstandings have been clarified) the different debates can mutually inform, and what is more, fundamentally enrich, each other. This potential of cross-fertilisation seems indeed to point to a form of progress and possibly innovation.

As a final reference to the theme of chaos and innovation, I briefly point to the ways in which the book aims at clarifying the nature and character of various reasons and arguments that often feature rather uncritically in the debates on European contract law. As the reader soon discovers, we often use arguments without critically reflecting on their normative foundations. As a result, we risk lumping together arguments that are categorically (normatively) distinct. The confusions and misunderstandings that thus emerge tend to obfuscate – and to some extent muddle – the debate on European contract law. Most of the project consists in carefully identifying and categorising (almost dissecting) the nature and character of the various arguments that feature in the academic and political debates on European contract law – thus bringing order to perceived chaos. As Hesselink insists, once we better grasp how different arguments and reasonings are related to broader visions of society – that is, how they are effectively retraceable (assimilable) to, or rooted in wider political views – we are also better equipped to reflect on and articulate our own stance in the debate. What is more, once we better understand the normative roots of the arguments and reasonings we use, this may also shed light on where they may lead us when thought through. The book’s hope is thus that this helps us in imagining alternative futures for European contract law.

The book symposium was organised around two panels. The first panel consisted of Iris van Domselaar, Laura Burgers, Christina Eckes, and Ivana Isailovic. The commentators of the second panel were Jeroen Kortman, Candida Leone, Aukje van Hoek and Gareth Davies. It appeared that the radical aspirations of Justifying Contract in Europe provoked many of the commentators. According to some, the book did not go far enough and was not sufficiently radical, whilst others raised concerns regarding the book’s scope and method. In any event, the discussion that Justifying Contract in Europe has solicited is likely to continue for a while. And after all, is soliciting debate – ‘creating havoc’ to put it in the imagery of La Folie des Rues – not one of the most fruitful interventions one can make?